The bright colors of the polar night

New Year's illumination, performances and parks of glowing ice sculptures: how the polar night is met in the northern regions

26.11.2021 // Polar night is a time when the sun does not appear over the horizon for more than a day. In some northern regions of Russia, it will begin very soon, at the end of November. The polar night will be observed, in particular, in the cities of Apatity, Murmansk, Norilsk, Naryan-Mar, Pevek, Kirovsk and others. In the Arctic zone of Russia, more than 2 million people find themselves in complete darkness every winter, and the task of the regional authorities is to make this time as painless as possible for people.

Where is the longest polar night

The duration of the polar night is different everywhere. At the latitude of the Arctic Circle (66 ° 33 '), it lasts only two days, and at the North Pole - six months. Of the continental settlements of Russia, the longest polar night is in the village of Dikson in the north of the Krasnoyarsk Territory (80 days). In the Yakut village of Tiksi, it lasts about 67 days, in the Chukotka Pevek - 50, in Norilsk - 45, in Murmansk - 40, in Naryan-Mar - 25, in Vorkuta - 11 days.

The polar night is not always pitch darkness. At latitudes up to 72 ° 33 'around noon, you can even do without additional lighting, although the sun never rises. To the north, between 72 ° 33 'and 78 ° 33', artificial lighting is needed around the clock, although at noon it will still become a little brighter. And finally, between latitudes 78 ° 33 'and 84 ° 33' there is not even a hint of any "enlightenment". Such a polar night can be observed by residents of the northernmost settlement in the world - the Canadian village of Alert.

It is impossible to "cancel" the polar night. However, in northern cities they figured out how to make this time comfortable for life. So, in many Arctic regions, from November-December to March, classes in schools begin half an hour or an hour later than usual, lessons are shortened, children are asked less at home, and when the polar night ends, an additional week of vacation is introduced so that the children adapt to the changed conditions.

Doctors advise to pay more attention to your health during the polar night, regularly play sports that contribute to the production of serotonin, follow the regimen, eat more vitamins and visit solariums. Even artificial sunbathing stimulates metabolic processes in the body.

A positive attitude is also important, therefore psychologists advise to fill the house with aromas and bright colors during the polar night. Urbanists also follow these guidelines by adding colorful graffiti to the urban space.

“The long winter and polar night require serious approaches to the development of color and light solutions in the environment,” say experts from the Murmansk Arctic State University (MASU). To develop and implement the ideas of Arctic design, the university launched a large-scale project "Creative City - Territory of Development". 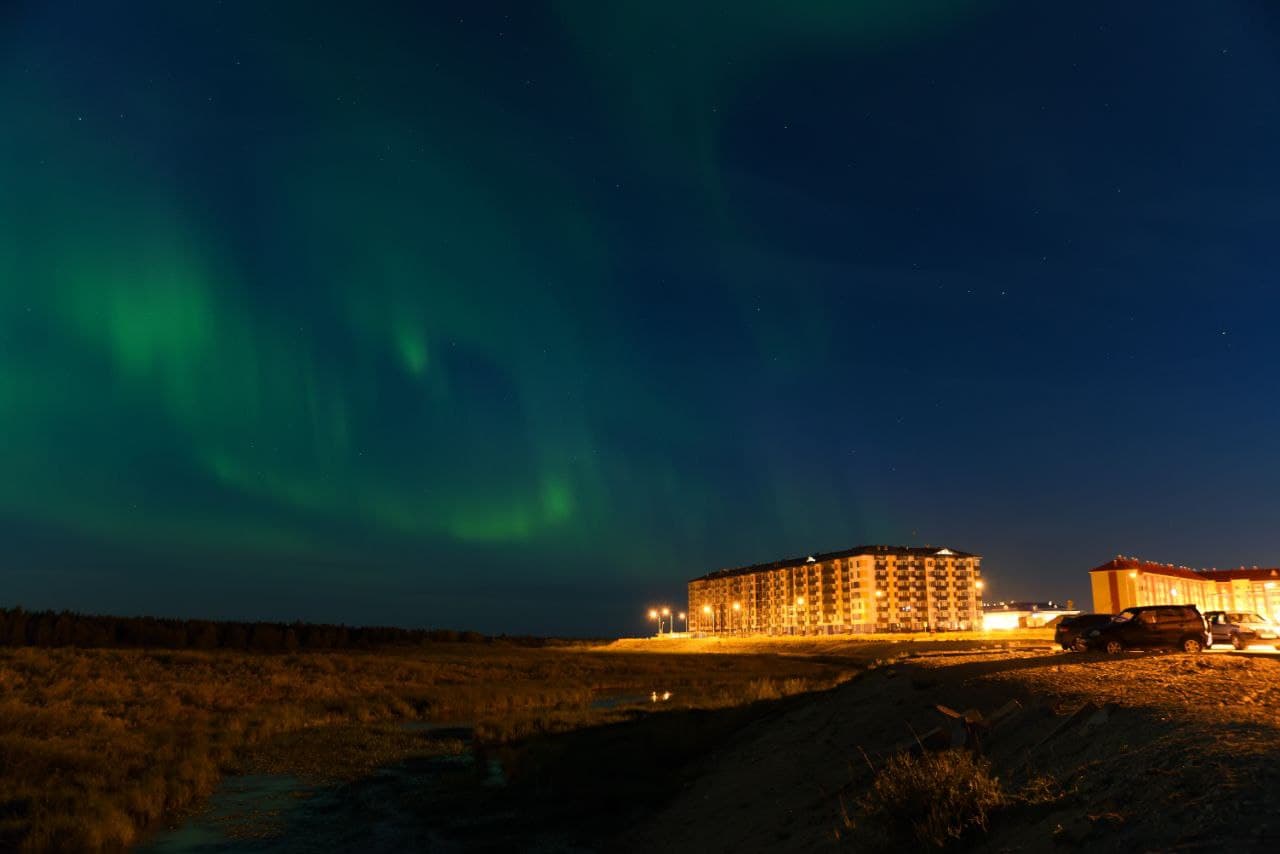 According to artist Valentin Tovtian from St. Petersburg, who several years ago participated in a project to paint houses in the town of Zapolyarny in the Murmansk region, they made a beautiful flower in a house on Yubileinaya Street in six days. “Even when houses are simply painted in bright colors, it’s already beautiful, not to mention the drawings,” he notes.

The design of houses in Anadyr is also distinguished by the bright colorful coloring of the facades of residential buildings with various graffiti. “Well-groomed and vibrant metropolis”, this is how travelers who first come to Anadyr describe it.

And on the polar night, the northerners are entertained by bright, thanks to illumination, parks of ice sculptures. On December 18, a theme park dedicated to northern animals will open in Norilsk. The main character of the New Year's fairy tale is the Tiger. 420 ice blocks will be required to build the theme park. Some of the material has already been brought to the site in the Dolgoe park. An ice city is also being erected in Kayerkan and Talnakh. The figures in Talnakh will be made of fiberglass.

On December 25, the famous "Snow Village" will open in Kirovsk. It is included in the Russian Book of Records as the largest structure made of snow. "Snow Village" is a spacious hall with exhibits made of snow and ice and multi-colored illumination. The construction of the snow gallery has already begun.

As Arctic Russia was told in the tourism committee of the Murmansk region, a performance will be organized in the city of Kovdov on December 22, during which a meeting with the Serpent Kuvvt will take place. "A huge sparkling fairy-tale character comes out into the city in the midst of the holiday in order to ignite a fire of power and light in each of us and present the guests of the holiday" Park of the Hyperborean period, "the committee said.

Lighting is of great importance for northern cities in connection with the onset of the polar night. Illumination in the city of Naryan-Mar is considered one of the successful projects in this regard. The project covered the buildings of the Museum of Local Lore, the Central Library, the Main Post Office, the Epiphany Cathedral, as well as the buildings of the city administrations and the Nenets Autonomous Okrug and Marad Square with her.

Architectural and artistic illumination of buildings in the center of Naryan-Mar has already received international awards. In 2020, she entered the top ten lighting projects of the authoritative International Global SSL Showcase TOP-100. The Naryan-Mar project, according to the jury, meets such criteria as innovative technologies, lighting solutions. The weather conditions are taken into account - all equipment is waterproof and frost-resistant. This innovative solution allows you to influence the improvement of well-being, mood and increase the performance of a person in the conditions of the polar night, the authors of the rating note. 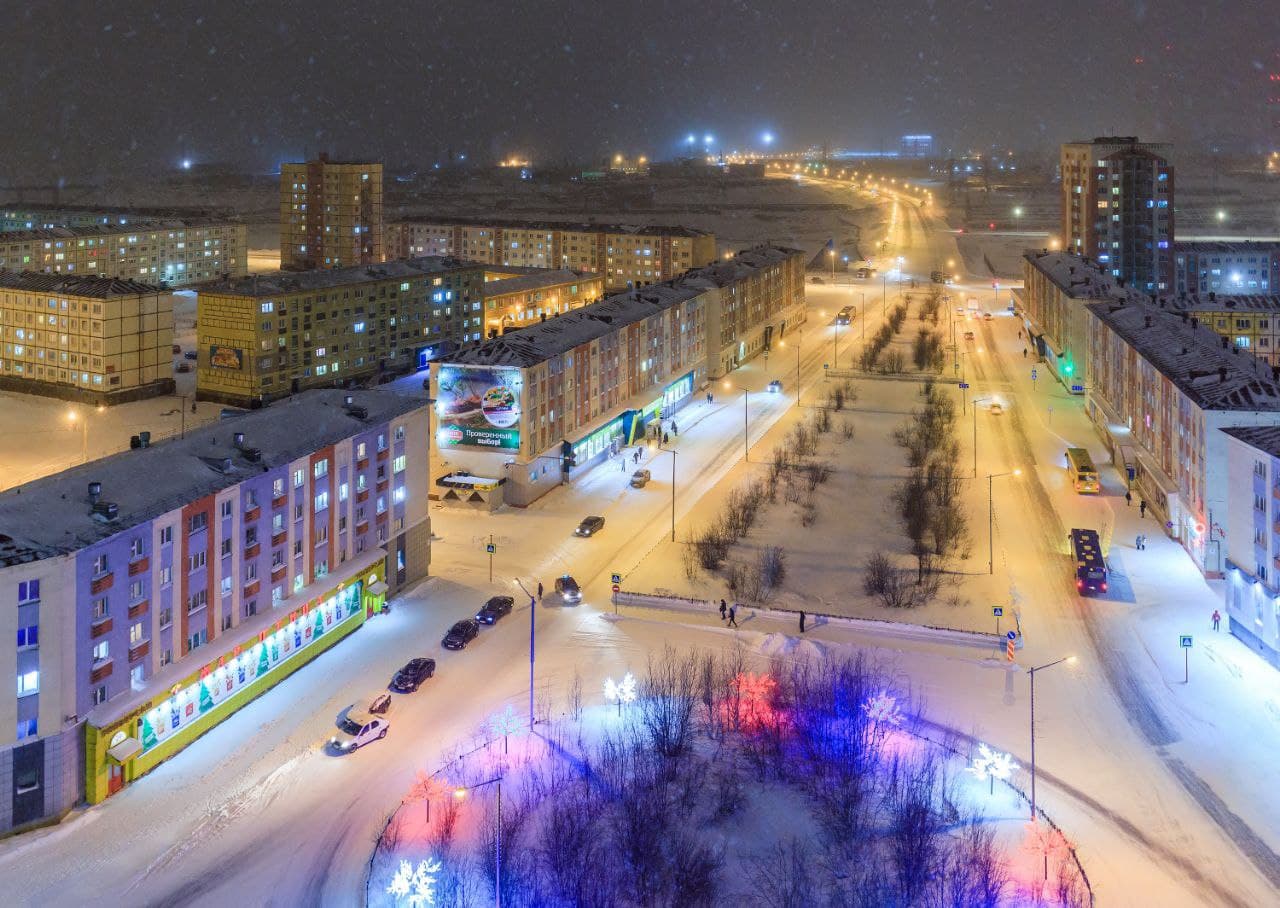 In connection with the imminent onset of the polar night in all northern cities, intensified preparation of lighting systems is underway. Thus, the city services of Norilsk started it already in the first half of November. "The polar night begins on November 30, and now the time when street lighting is turned on increases every five days. Also, on November 30, New Year's illumination is switched on in the city ahead of schedule," the press service of the mayor's office explained.

Out of 720 hours in December, street lamps in Norilsk will operate for 647 hours and 50 minutes.

We are also ready for the polar night in Murmansk. Here it will start on December 2. In this regard, the lighting of the regional center will be turned on in the afternoon at 14.40, and turned off only on December 3 at 10.25. Thus, the light on avenues and courtyards will work 19 hours 45 minutes. As Arctic Russia was told in the Murmansk Region Tourism Committee, the festive lighting on the city streets this year will be turned on on December 5.

When writing the article, materials from "Rossiyskaya Gazeta", TASS agency, "Interfax-Siberia" were used

Read more The Pros of Sub-Zero Weather: How Eternal Winter Can Help How permanent cold gave the Arctic its key natural resource and provided people with great vacation opportunities beyond the Arctic Circle

Read more
Zapolyarye Unique fauna of the Arctic
Anadyr The easternmost, the northernmost, the longest
Naryan-Mar Arctic adventures in the tundra capital