An entrepreneur creates the first glamping in Chukotka

15.10.2021 // Glamping is a relatively new activity for Russian tourists. The name is comprised of 'glamorous' and 'camping'. On the one hand, glamping is about an immersion into the wilderness, an escape from civilisation; on the other hand, rather than living in tents, tourists stay in modern, comfortable and beautiful dome-shaped structures with all the necessary amenities, good furniture, delicious food and a high level of service. This winning combination is the reason glamping is rapidly gaining popularity in Russia. The country's first glamping location was created in 2016, and now there are about 180 of them, including one in Chukotka. 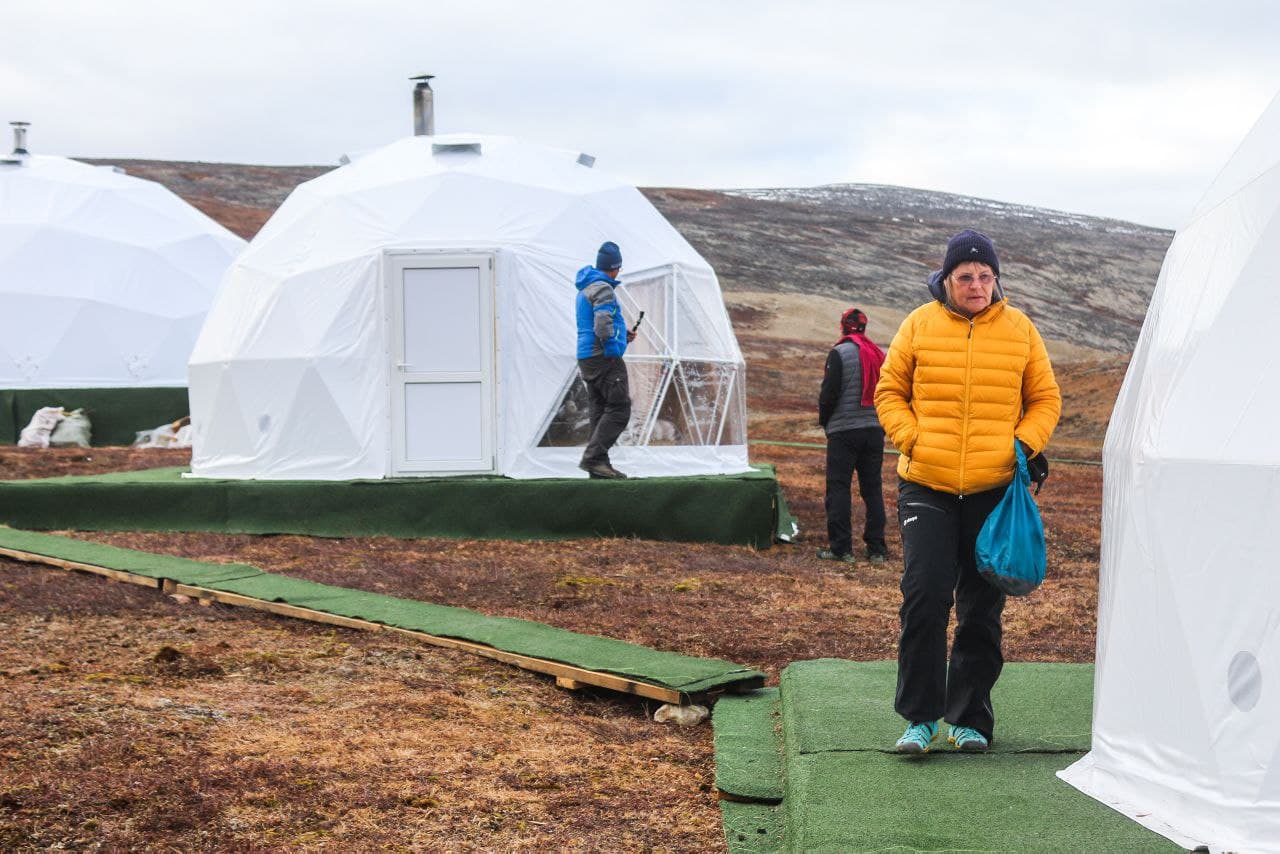 In September 2021, entrepreneur Maksim Krupenya opened the north-easternmost glamping location in Russia which remains the only one in Chukotka. The facility is located in Bezymyannaya Bay, 20 km from Lavrentiya village, near the famous Lorinsky hot mineral springs. The glamping is called Umka, which is a Russian abbreviation for 'wonderful routes, comfortable atmosphere'. The entrepreneur tries to make sure the facility lives up to its name.

The start of Umka

Maksim Krupenya is a military retiree. He retired as an officer in 2020. He used to serve right there, in Lavrentiya village. A few years before the retirement, he started learning about the tourism business. When he retired, he decided to start his own business. 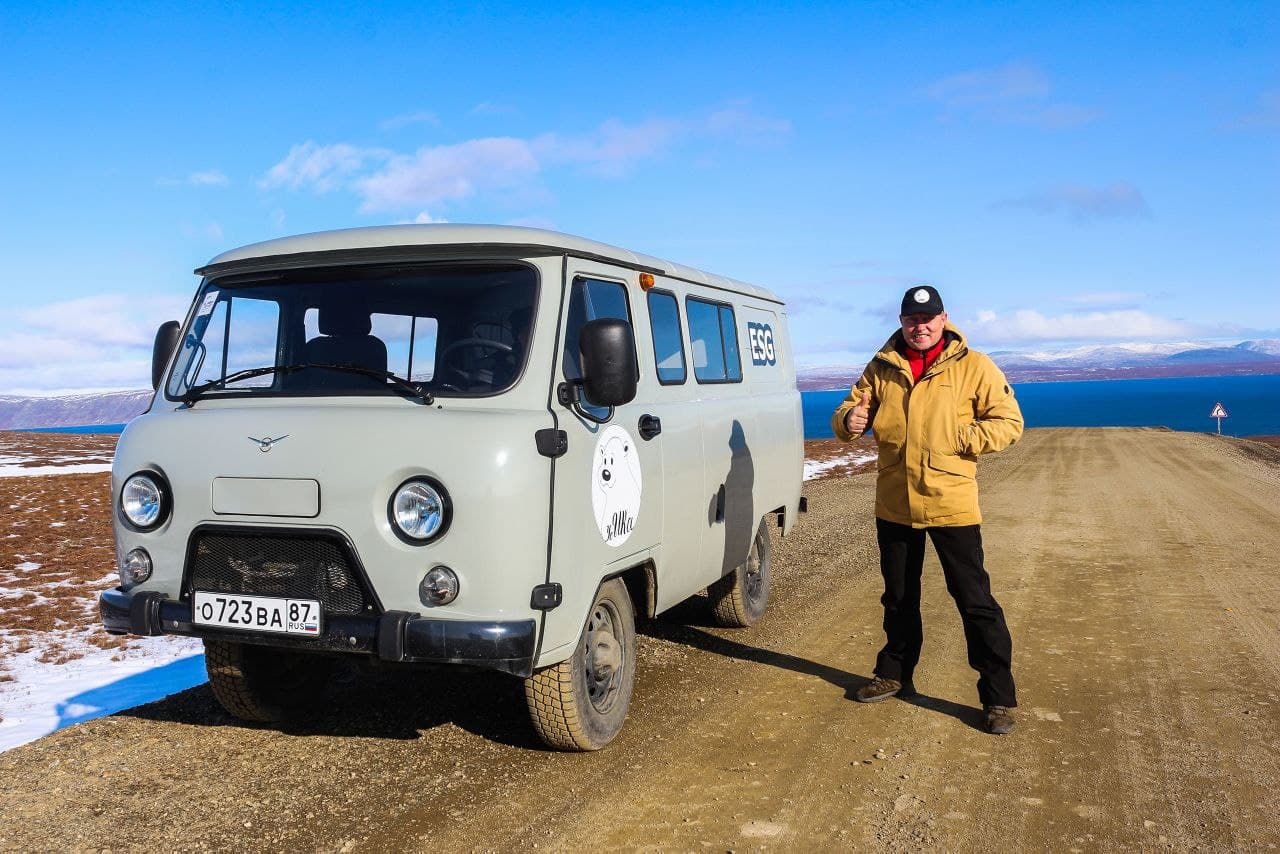 'A couple of years ago, I received one hectare of free land from the government and decided to use it for creating a glamping site – the first one in Chukotka and the easternmost in Russia', says Maksim Krupenya. 'The glamping opened in the middle of September, but not for tourists – just to test the efficiency and reliability of all the constructions and systems. The test was successful: the winds were blowing at 30 metres per second on those exact days, but the geodesic domes were not damaged. The base has been dismantled until the next tourist season, with only the foundations of the structures left on the site. My plan is to receive groups of tourists three months a year, from July 1 until September 30, as the tourist season is short in Chukotka. Right now I'm looking for tourists who would like to come here next year and I've already found some'.

'Glamping is a great initiative and a brand new tourist activity for Chukotka. The location in Goryachiye Klyuchi is very suitable for the purpose. The glamping site is mobile, durable and well-integrated into the surrounding landscape. Most importantly, the owner is engaging with locals and the youth and has further development plans. We will be supporting the project', says Chukotka Governor Roman Kopin at the glamping's opening. 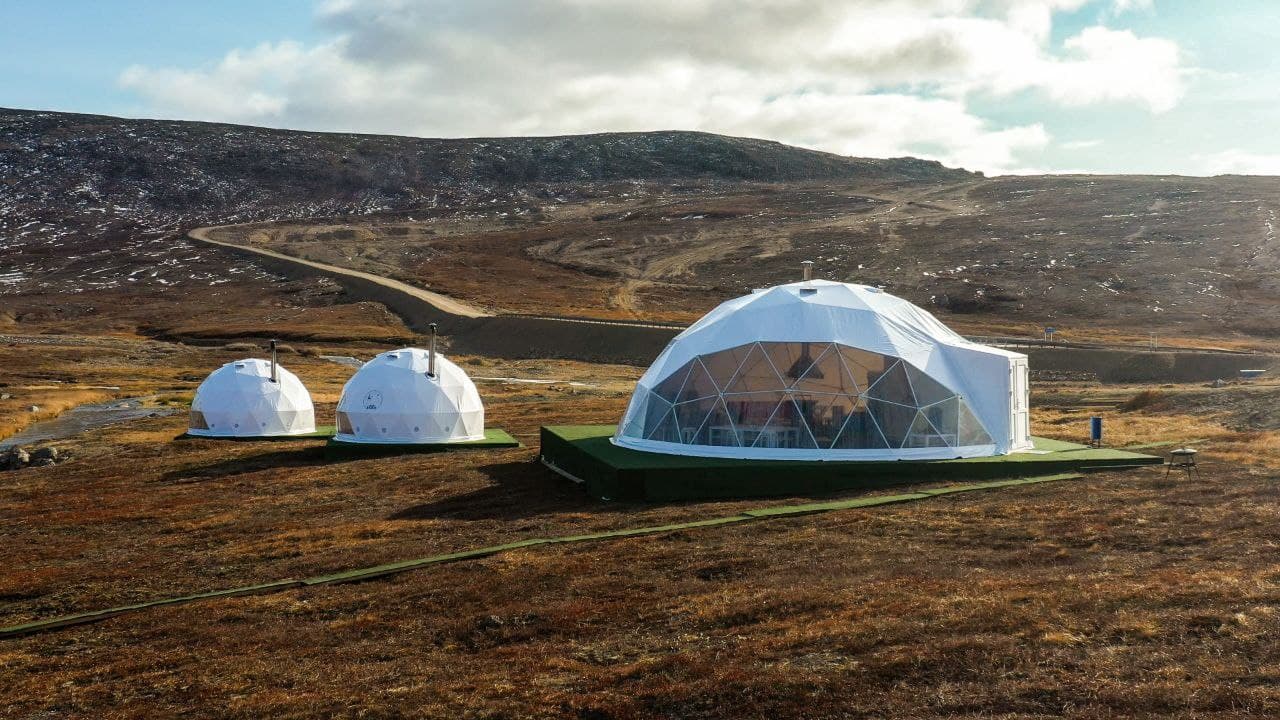 'I can already feel the support'

Maksim Krupenya prepared a business plan for his project with the support of the Chukotka Development Fund. He took a loan of RUB 5 mn with an interest rate of 5.5% from a Chukotka microcredit company. Another RUB 500,000 came from entrepreneur's personal funds. The same amount was provided as a grant by the area's Department of Finance, Economy and Property Relations.

The money was spent on purchasing machinery and equipment (e.g. a cabin cruiser) and, most importantly, six frame and tent structures – geodesic domes. Five of them are double-framed and insulated, which is perfect for the harsh climate of Chukotka. Each guest dome has two beds: a double bed and a bunk bed. Thus, each structure is designed to accommodate up to four people. The sixth geodesic dome is more lightweight and designed for summer. It will house a lounge area which will combine a café, a club and a recreation space. 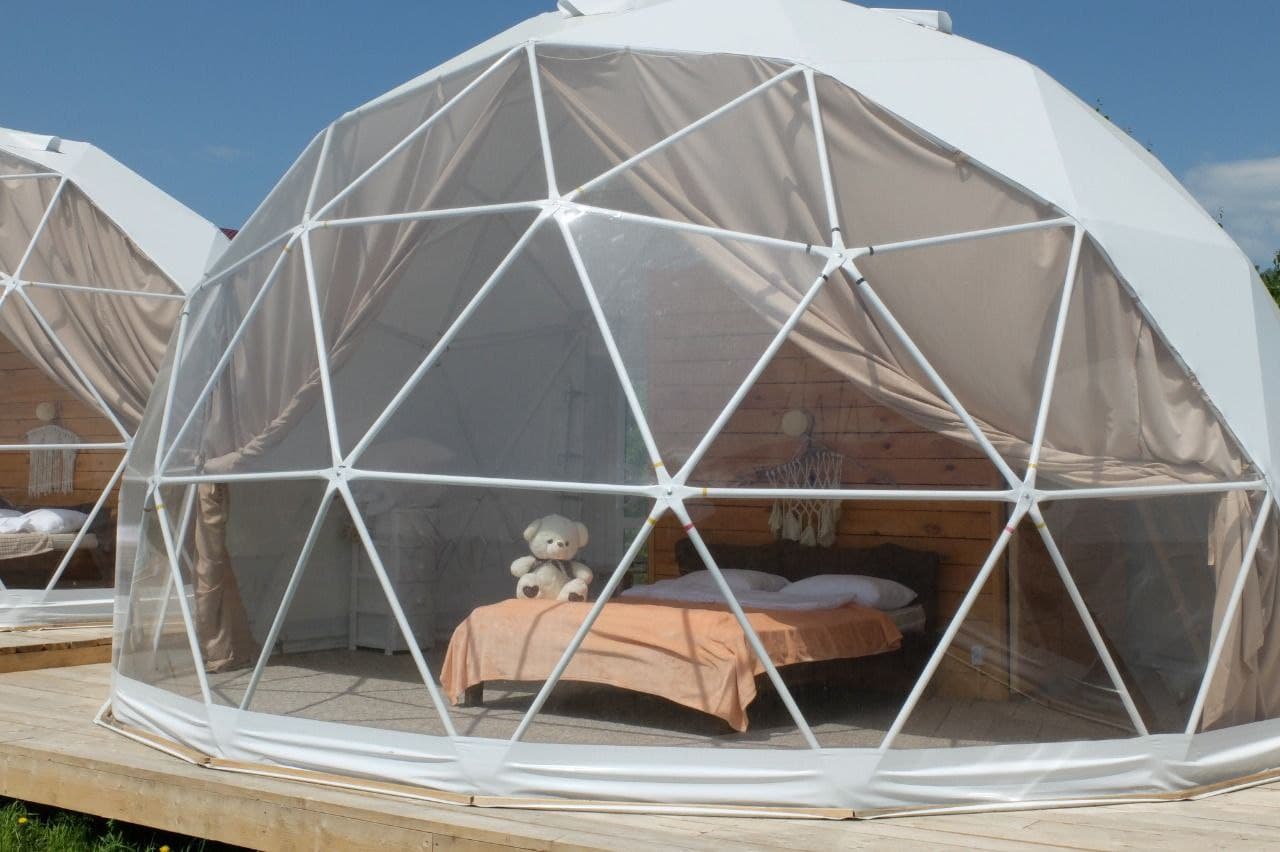 The glamping site is already equipped with a helipad, an area for games and sports (including national Chukchi activities) and separate sanitary facilities.

Maksim Krupenya's company will also organise leisure activities for their guests, including tours to Chukotka's natural attractions. They have already created about 20 routes, including trips to national Chukchi and Eskimo settlements and reindeer herding camps, river and sea fishing, mountain climbing, kayaking… Watercraft, a helicopter and an all-terrain vehicle will be used for the tours; tourists will be accompanied by experienced instructors… The entrepreneur is also willing to provide transfer services from Lavrentiya Airport to the glamping. He expects to receive ten tourist groups during one season. In the future, however, Maksim Krupenya is planning to grow his business. 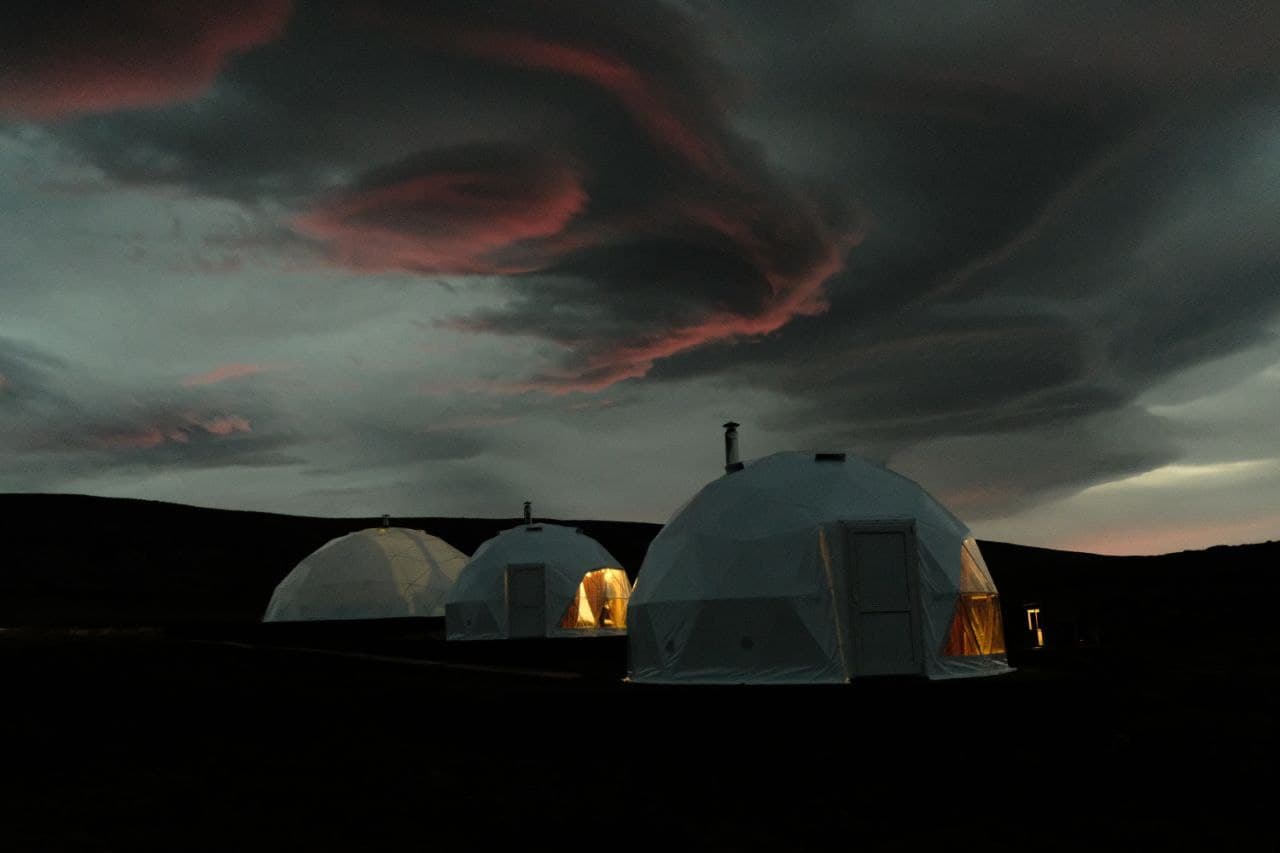 'I'm yet to obtain AZRF (Arctic zone of the Russian Federation) residency, but I have already received a lot of support: free land, a grant, a preferential loan. As soon as I get the residency, tax and insurance benefits will be a big help. At the first stage, I'm planning to create five jobs, but things will only go up from there', says Maksim Krupenya. 'After Chukotka, I want to develop my project in Kaliningrad and build a Chukotka-style glamping with a proper atmosphere, cuisine, Chukchi festivals and rituals. I'm going to promote my native region across the country!'

Infrastructure Let's Fly to the Arctic!

Murmansk Airport to build a new terminal as an AZRF resident