Why are reindeer called the main animals of the Russian north?

14.10.2021 // Reindeer are a vital resource for people of the north. Used as a means of transport, these animals are also the main source of meat and hides. This was the case hundreds of years ago and not much has changed since: in the Russian Far North, it's still impossible to survive without reindeer.

The indigenous people are not the only ones who appreciate this fact: many entrepreneurs in the Arctic start businesses focused on reindeer and reindeer breeding. After all, why not take advantage of the fact that Russia is the world leader in the number of domestic reindeer. In 2020, there were 1.6 mn reindeer in the Russian Arctic, which is 60% of the global population.

From antlers to hooves

Venison is the main dish of the indigenous peoples of the North. It's a perfect product for northerners, rich in nutrients, including vitamins and microelements. Venison is easy to digest and covers the enormous energy needs of people who live in the harsh conditions of the Arctic. In the north, venison is even served raw. The Nenets, for instance, eat reindeer right after killing the animal and dip pieces of meat into the blood that is still warm. Stroganina is made of thin slices of raw venison and served with salt and pepper. Young reindeer antlers are a delicacy for children. Velvet antlers are used to make medicines that strengthen immunity and help you feel energised. Tripe is used for sausages and hooves are added to jellied meat. The meat is usually boiled or roasted over an open fire. 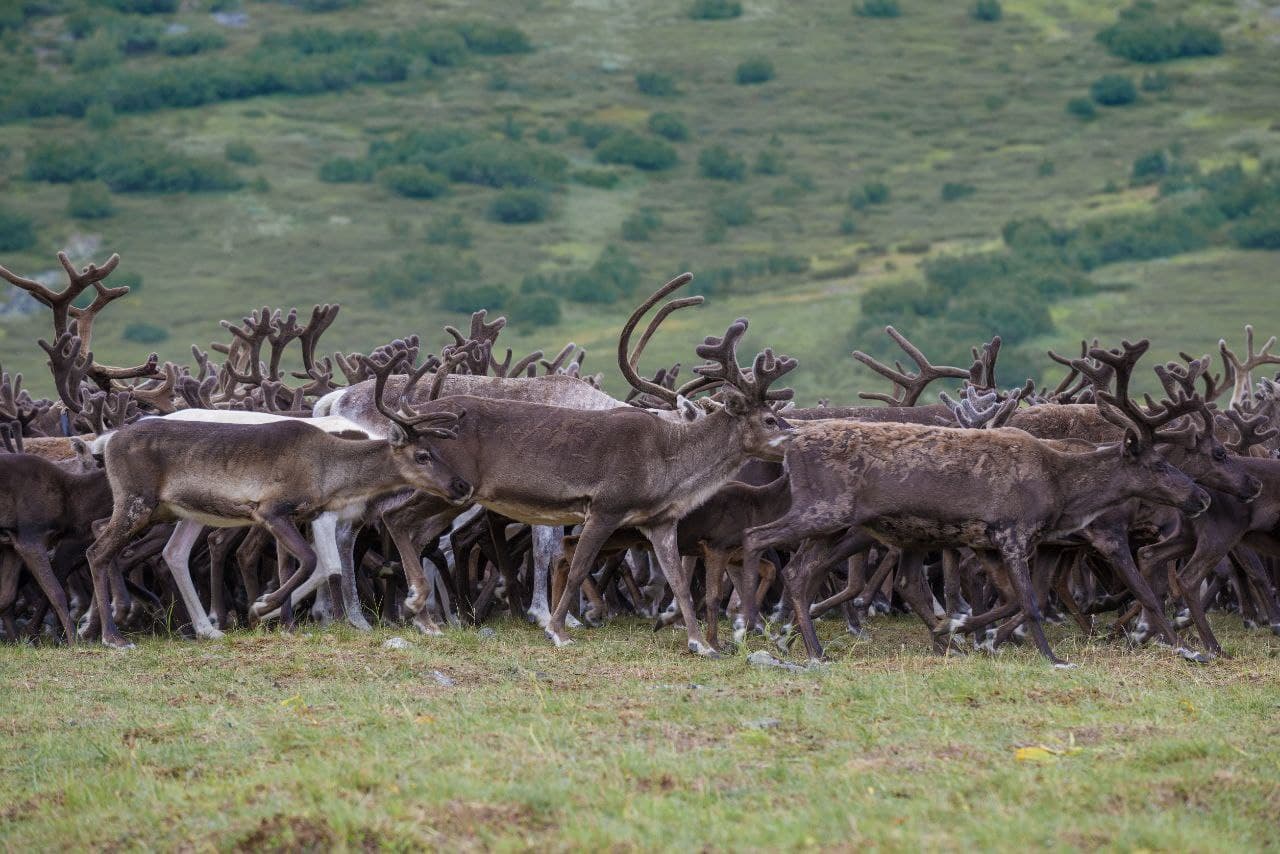 There are definitely some national dishes that we wouldn't dare to try. However, restaurants specialising in northern and Siberian cuisine always offer venison dishes that follow the northern traditions but are still popular with everyone without exception. Grilled venison with lingonberry sauce is one of them. Entrepreneurs have also mastered the production of venison products, using both traditional and original recipes.

'Reindeer take everything their bodies need from nature, which affects the taste of the meat. Reindeer fat is visceral and is healthy for you, unlike the fat of other animals', says Aleksey Golubev. According to Golubev, his business did not experience any challenges during the pandemic: customers kept coming for venison even from other regions and purchased it in large quantities.

The production of reindeer products using original recipes has been gaining popularity in the Yamal-Nenets Autonomous Area. For instance, Yamalskiye Oleni ('Yamal Reindeer'), a company based in Yar-Sale village, makes canned venison with herbs, garlic and bell peppers and canned venison liver stew. Their products sell like hotcakes and are distributed not only throughout the Yamal-Nenets Autonomous Area but also in Yakutsk, Moscow and Saint Petersburg.

Noyabrsk-based Yamalets ('Yamal Resident') has launched the production of jamón and other venison delicacies. The company makes Novy Urengoy sujuk (spicy and fermented sausage), Salekhard pastirma (air-dried cured meat), Noyabrsk salami and Muravlenko venison slices. According to the company's philosophy, their products are more like exclusive souvenirs from Yamal, rather than just food.

This summer, the Yamal-Nenets authorities allocated RUB 15 mn to launch a company that makes crisps and angel wings from venison. A venison processing plant is set to open in Salekhard this year.

Like hundreds of years ago, nomadic reindeer herders still cover their portable dwellings with reindeer skins. In the western Arctic regions, they live in conical chums; in the northeast – in semi-circular yarangas. Each dwelling requires 40 to 60 reindeer skins. These homes can withstand the worst colds and winds.

Traditional northern people's shoes and clothes are made of reindeer fur. The Chukchi wear kukhlyankas – fur shirts worn on bare skin. In winter, they wear two kukhlyankas at the same time, but one of the fur coats is worn inside out. You can even sleep outdoors in this fur 'sandwich' and you won't get cold! The peoples of the western tundra – the Nenets, the Khanty, the Komi and the Mansi – wear similar clothes. Malitsa fur coats are made of two whole reindeer skins and are also worn inside out. You will always stay warm in a pair of boots, mittens and headwear made of reindeer fur. No wonder scientists call this material the benchmark for winter clothes.

'Winter in the Taymyr is nine months long, and temperatures can drop below minus 50 degrees Celsius. But even in this freezing weather, a person dressed in reindeer fur will not get cold. You can even sleep in the snow like reindeer. On many occasions, children who got lost in a snowstorm or hunters who had to spend the night in the tundra then safely returned to the nomad camp. Furs served as their clothing and a makeshift sleeping bag', says Elena Sotnikova, a professor in the northern branch of the Norilsk College of Arts. According to Elena, reindeer skin has unique thermal insulation properties. It consists of thick, hollow hairs and a dense underfur which prevents air movement within the fur itself. This provides amazing thermal insulation which is in many ways superior to modern materials.

If you want to appreciate just how important reindeer are to the indigenous peoples of the Arctic, you have to see the traditional Reindeer Herder's Day celebrations. In the north of Russia, it is celebrated for several days in spring. During the holiday, you can live in a fur chum or yaranga, try national dishes made of venison, join a master class on the processing of reindeer hides, compete in harness throwing, have a photoshoot in national clothes from reindeer fur and, most importantly, go on a reindeer sleigh ride. Tours to the Russian Far North to celebrate Reindeer Herder's Day and to visit reindeer herding camps are offered by most major tour operators in Russia.