The land of a thousand lakes, canyons and waterfalls

The Putorana Plateau remains a blank space on the tourist map

The Putorana Plateau is one of the most remarkable miracles on earth. The size and the pristine beauty of this huge trap plateau included in the UNESCO World Heritage List are out of this world. Bottomless canyons cutting through ancient basaltic rocks to the very bottom. Hundreds of thousands of lakes so clear that you can see the fish at the bottom. Waterfalls of all kinds, from frighteningly huge to small ones, with a frame of rainbows. An Arctic desert on the flat tops of the plateau, where unique snow sheep are grazing next to reindeer. That's where you can truly feel the greatness of nature, in complete solitude: there is not a living soul for hundreds of kilometres.

The Putorana Plateau is the second largest plateau in the world after the Deccan Plateau in India, and the only trap plateau in the world composed entirely of basalt rock. Around 180 million years ago, gigantic volcanoes were spewing out streams of red-hot basaltic lava in this area. The lava was spreading all around like hot chocolate on a saucer, and solidifying in layers, dozens of metres thick.

Little by little, the entire plateau turned into a massive layered cake with up to 30 layers. It occupies 260 thousand sq. km—more than the size of Great Britain.

Today, this almost perfectly flat plateau located north of the Arctic Circle, in the south of the Taymyr Peninsula, is cut across by a range of canyons. When the lava was hardening, it was breaking and forming deep fractures, and eventually, the entire "cake" cracked to the very bottom. Water and temperature changes turned those cracks into deep canyons with stepped walls. That's what formed the trappean relief. In Swedish, "traps" means a staircase, and every basaltic layer is a step of the huge mountain staircase. This staircase goes up to the surface of 'mountains without peaks'—that's what 'putorana' means in the Yukaghir language.

In terms of the number of waterfalls, the Taymyr plateau is second to none. 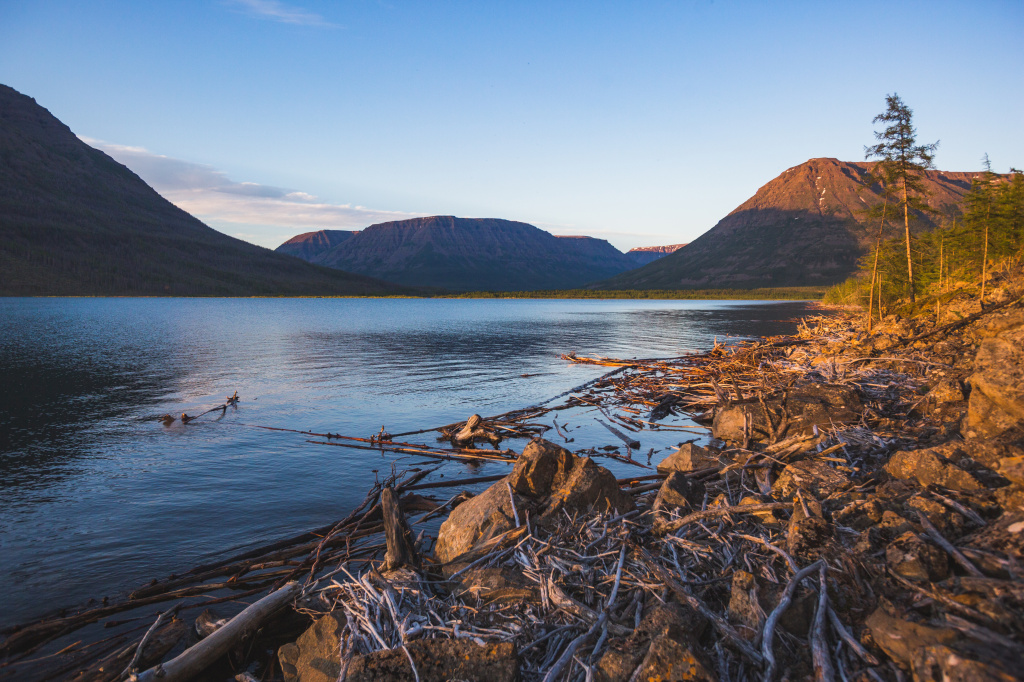 Many of them are champions in their categories. This includes the tallest plunge waterfall in Russia, Kandinsky. Talnikovy Waterfall appears during the high water period when the snow starts melting. It is inferior in height only to the famous Angel Falls in Venezuela. But you can only admire its beauty in summer: Talnikovy freezes in winter months and turns into a gigantic icicle.

Over 245 thousand lakes have formed at the bottom of deep gorges, where ancient glaciers used to be, in floodplains and oxbow lakes of Putorana rivers. Freshwater reserves of the lakes of Putorana are second only to Lake Baikal.

In 2010, the Putorana Plateau received an international conservation status. The plateau of the Putoransky Reserve became the ninth UNESCO World Heritage Site in Russia. Whoever sees photos of this unique place is bound to want to visit it.


Read more Murmansk: the largest city north of the Arctic Circle Port city in the ice-free Kola Bay receives cargo and welcomes tourists all year round