The Pole of Cold and Human Capabilities

Oymyakon is the coldest inhabited place on Earth

The Pole of Cold in the northern hemisphere is located here. Its counterpart in the southern hemisphere is completely uninhabited, so Oymyakon has no competitors for this title on the other side of the globe. However, there may be competition among the village's 'own'. Two other towns in Yakutia, the village Tomtor and the town Verkhoyansk, also vie for the title of 'coldest inhabited area'.

Debates have been raging for decades to determine where the lowest temperature truly is. Tired of the arguments, the citizens of Oymyakon took matters into their own hands by installing a sign that says 'Oymyakon—Cold Pole' in the middle of the village, along with their record-breaking temperature of –71.2°C. Winter in the region stretches from late September to the middle of May, and the temperature often drops as low as –60°C. The average winter temperature in Oymyakon ranges between –42°C and –50°C.

More than 500 Russians and Yakuts currently live in Oymyakon. The majority of the population are reindeer herders and cattle breeders. Reindeer and fluffy horses unique to Yakutia spend the entire winter outdoors, foraging and pawing at the frozen soil with their hooves to reach the grass below. Cows, however, have their own heated barns. They are only allowed outside on days when the temperature is above –30°C. Still, they have to wear special 'bras' to protect their udders from the cold.

Hunting and fishing are very important for the local economy. Thankfully, unlike other Yakutian rivers, the Indigirka never freezes to the bottom. Even during bitter cold spells, the top layer of ice is never thicker than a window pane. In some spots, the water doesn't freeze at all. It is believed that hot springs are located at the very bottom of the river. 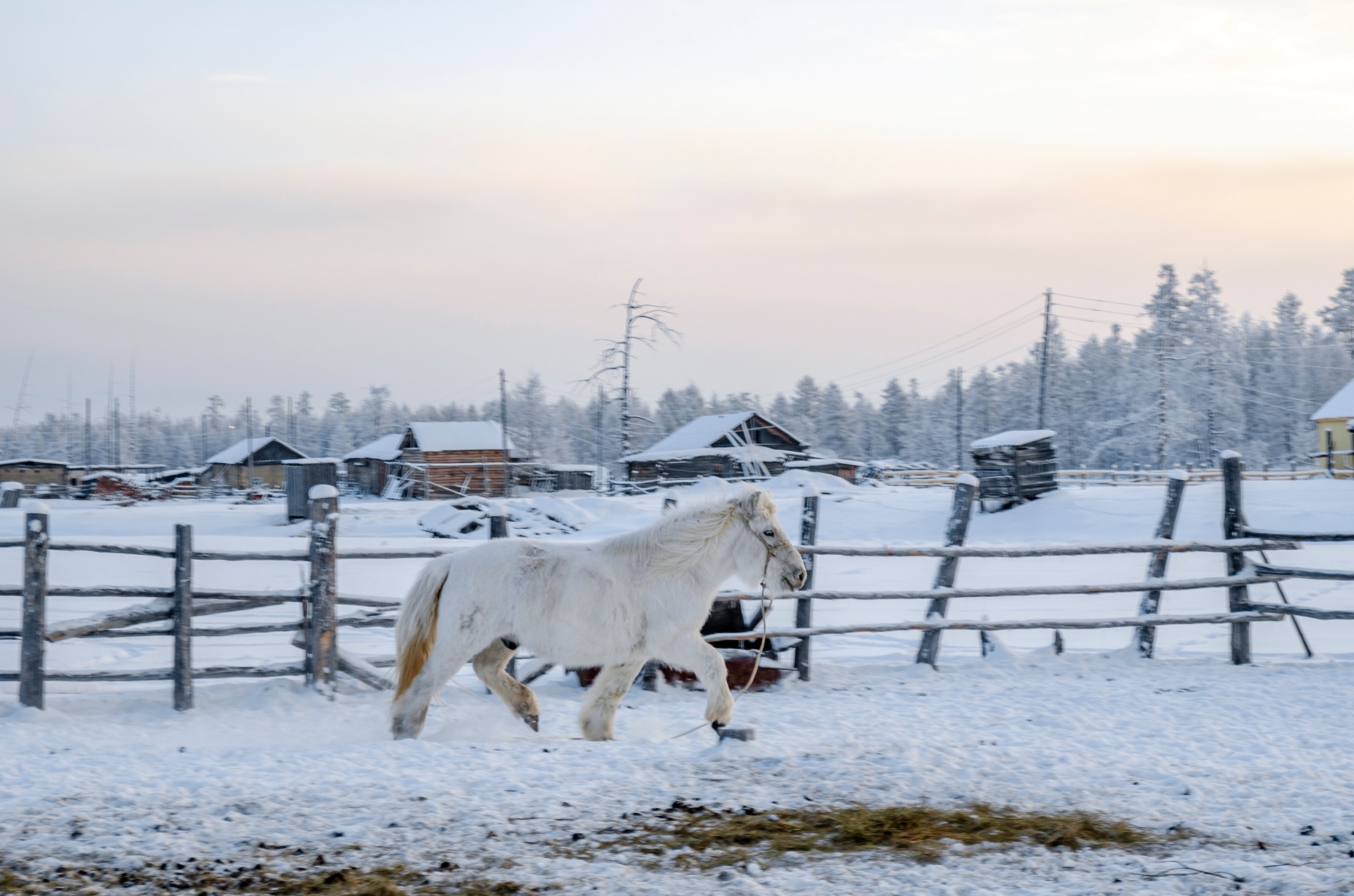 Oymyakon citizens don't need fridges to keep their food fresh. They can keep meat, fish and berries right on the terrace all winter long. However, the meat has to be sawed instead of chopped with a cleaver, or else it will splinter into tiny pieces.

Due to the cold temperatures, machinery is often much harder to handle than cattle itself, and locals have to look after their equipment with even greater care. Car engines in Oymyakon are run almost constantly to prevent them from freezing. Even if a car is left outside for a few hours with the engine running, it will eventually freeze and the tyres will turn to rock. Tough luck—you'll have to wait until summer to start it. That's why cars are all parked in heated garages and warmed up before use.

Heating houses is also no laughing matter. Central heating with hot water is useless when it's –60 degrees outside. Best case scenario, the water will just get cold before it reaches the house. Even the pipes that supply cold water must be heated. To do this, they are equipped with special electric cables and a protective cover. 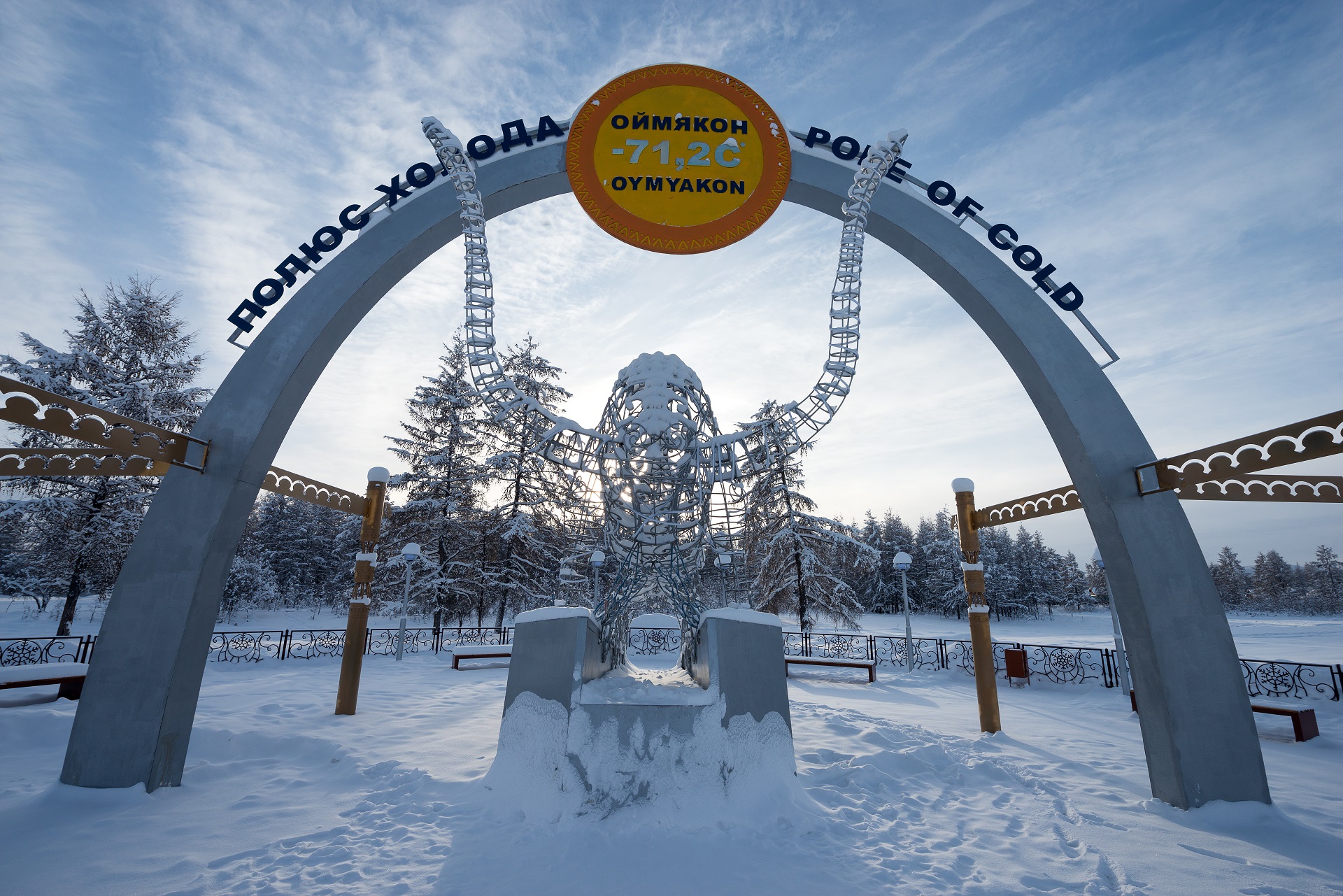 Still, schoolchildren love when the really hash cold finally comes around. When the temperature drops below –52°C all elementary school classes are cancelled. Lower than –56°C, and the entire school stays at home. On these short polar days, children can play outside, sliding down snow hills and throwing snowballs. Parents don't really have to worry about them catching a cold. At these temperatures, viruses simply die in mid-air, so flu epidemics are practically unheard of in Oymyakon. As long as the children wear warm clothes, there's nothing to worry about.

In the winter, true Oymyakoners prefer ankle-length coats made from reindeer hide to protect their legs from the cold. On their feet, they wear boots made of kamus, the skin of the lower leg of a reindeer. Their look is finished off with a sturdy fur hat and a warm scarf. Without one, it would be impossible to breath in such intense cold.